Not long ago, I had the opportunity to spend some time at the 911 Memorial in New York City. At night, it’s a powerful memorial of light, deep pools with waterfalls awash in light. Alone the edges of the pools the names of the people who died are cut into a metal shelf. The light of the waterfalls shines through each name. 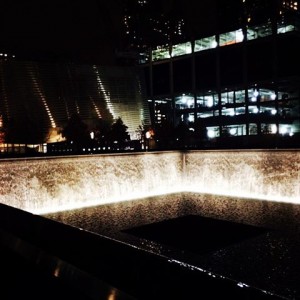 One of those names is Harry Ramos.  He worked at May Davis and his office was in the World Trade Center, tower two. Right from the beginning, Ramos was helping other people find their way to safety. It was total pandemonium. Ramos and some of his associates began the long descent from the 87th floor to safety. On the 53rd floor they came across a heavyset man whose legs just would not move anymore.

One of Ramos’ associates paused momentarily with the man, but then went ahead to try to get help. Ramos and another colleague were able to get him as far as the 44th floor. But the last set of elevators would not work. So back to the stairs. They were on the 36th floor when the first tower collapsed. Finally in desperation the heavyset man said, I can’t do it anymore. Firemen were screaming at the men to get out. The two men were faced with a dilemma: to stay with the man and risk it all or to leave him and escape. One man left. Ramos said to the heavyset man, I’m not going to leave you. A few minutes later the two men met their death in tower two.

An incredible story that speaks to us on so many different levels, servant-hearted values like courage and sacrifice, faith and compassion. But beyond that it tells the story of the dilemma we all face. In life we may often feel like we are alone…traveling the stairs on our own…or we notice people who are alone and there is something at our core that longs for community, for companionship, even though that connection can be risky and painful. On the one hand, I want to connect with others, but at what price? Companionship is is risky and potentially quite painful. On the other hand, I want to stay safe, unaffected by others, but at what price? Loneliness is a cancer.

As you ponder that, perhaps you might join the One and make a difference in someone’s life by simple sitting by them on the stairs of life, so that they need not sit alone.

Never alone.  He came. God with  us. Never more alone.