This last week — Wednesday to be exact — I was walking out of the local breakfast eatery, the Waffleshop; an S4 comfortably in my belly and I saw it.  A smudge of black on someone’s forehead.  Then I remembered, it’s Ash Wednesday.  To be honest, one of 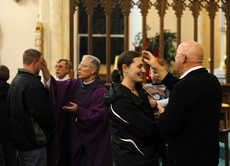 It reminded me of an Ash Wednesday story I ran across a few years ago.  Pastor Rich Starr — the previous year — had decided that he wanted to keep the leftover plam branches from the Palm Sunday Service and use them on Ash Wednesday.

He’d read that some churches did that, and then burned them the following year for the Ash Wednesday Service.  When Ash Wednesday arrived, Pastor Starr grabbed his palm branches and placed them in his charcoal grill.  They didn’t want to burn, so he crumpled up some newspaper and laid the branches on top. That did the trick, but the ashes came out very chalky gray.  He was disappointed. He had expected the ashes to be darker. “This will never do,” he frowned; “When I make the sign of the cross on people, it won’t show up. They need to be darker.”

He walked into the church office to look around.  “Ink, wouldn’t work.  But toner! That’s it!  I’ll add some copy toner to the ashes.  They will show up good and dark.”  The service went well that evening at Prickly Pear United Methodist Church. It ended with everyone receiving their mark, the ashes in the sign of the cross.   It was a new experience for the people, but they were good sports.  Anyway, tomorrow the cross would be gone — washed off their foreheads.

So on the day after Ash Wednesday, all over town, while Catholics and Lutherans and Episcopalians merged once more into the ordinary world, United Methodists stood out, black crosses boldly marked on each forehead. Everyone who encountered them that day, on the street, in the café, in the stores, knew a United Methodist when they saw one!