An Urgent Need for an Ancient Christmas

I hesitate to even blog about this.  Because he’s not an illustration of what’s wrong with Christmas.  He’s a person.  He’s a person who had joys and disappointments, family and friends, perhaps even hopes and dreams.  He died the morning of Black Friday.  He was a  Walmart employee in Long Island NY, who had 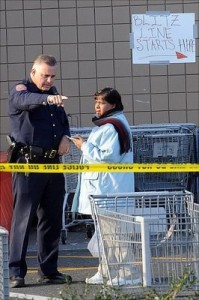 an early morning job to do — open the doors so that the crowd of people could come in and get their bargains.  Problem was everyone was in such a hurry to get to the big screen high definition tv’s that they knocked him down and trampled him.  Hundreds of people stepped on him.  He was pronounced dead a couple of hours later.

Fast forward across the country to a Toys-R-Us store in California.  Two women get into a fist fight, the two men pull out a gun and shoot each other dead.  Store employees assure us that the fight was not over toys. Then back to a different Walmart, where a man and a woman are fighting over a large screen tv.  He’s taking the last one — at least I hope it was the last one — and she jumps up on his back and 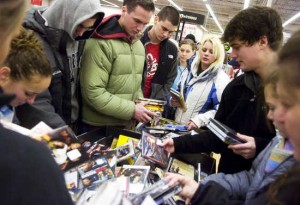 starts beating her fists against his head, face and back.  She’s yelling something like, “It’s my tv!  You aren’t going to take my tv.”

Then stop and think about the fact that last year the American people spent 450 billion dollars on Christmas.  Check out the website Empty Tomb and you will find that 29,000 children under the age of five die every day from preventable poverty conditions…like no water, food or basic medical care.  Empty Tomb estimates that 5 billion dollars a year would end most of those deaths.  Skip Christmas shopping one year and save ~29,000 kids every day for about 90 years.  I know it’s just numbers and you are probably right in thinking that the needs of the world cannot be so simplified as to say, let’s just skip Christmas shopping one year. But I guess the question I’m left asking myself is…  If it could, would we?

Okay…so I’m sitting here thinking:  a) guilt is a poor long-term motivator, b) this is a really down-er blog post after having a really great day with my family, and c) I have no desire to bah humbug Christmas, in fact I think Christmas is a wonder-filled time. 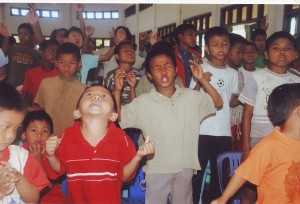 I think those types of moments are what the birth of Christ was all about.  I look at the world around me and the thought that comes to mind is this…  We have an urgent need for an ancient Christmas. What would that look like?  The kind of Christmas season that like the birth of Jesus has the potential to change the world?  Let me leave you with four two word descriptions of the kind of ancient Christmas we need.  Seek Jesus.  Risk More.  Give Presence.  Love All.

Take a moment and pray for the family and friends of that Walmart employee.  It’s going to be a hard Christmas for them.  Then ponder what our Christmas might look like if we seek Jesus, risk more, give presence and love all.