Is there any other kind you ask?  Well apparently in Estonia, they think that the only kind of football is soccer.  I told the Estonian pastors that Mike Ditka — former coach of the Chicago Bears — once said that if God had intended for people to play soccer he would not have created arms!  They laughed — a little. 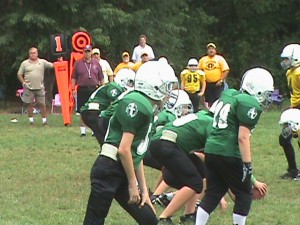 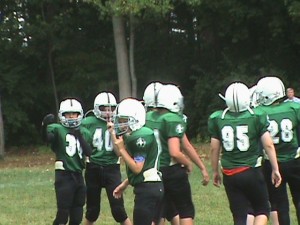 them on and great fun watching my son hit like a crazy man!  They beat the Golden Bears…but here I am in Estonia and Josh is playing at this moment and I can’t be there.  Don’t really like that.  But I keep calling Lynn’s cell phone — thank goodness for Skype’s 2 cents a minute plan from anywhere in the world — for updates.  It’s raining the proverbial cats and dogs there and my team isn’t doing so good.

I don’t usually pray for the weather, so it’s okay if it rains, we probably need it.  But I do find myself praying for sports teams…especially when one of my kids are playing…and they’re behind like they are right now.  I know there are probably dads from the other team who are praying for their sons as well.  I’ll let God sort it out, all I know is that James said, You have not because you ask not. Actually I’m okay if they lose, I just want Josh to play his best and have fun.

There is actually a great deal that we can learn about being a Jesus-follower from sports.  I think when I come back in October I’m going to spend a couple of weeks preaching about the verse that is on our walls… finish the race with joy. I’m pretty sure that if (American) football would’ve been invented in Paul’s day, he would’ve said something like.. play the fourth quarter with great joy!

Wish I could be there Josh…but for now…my prayer is simply finish the fourth quarter with joy!