“You can have any color you want, as long as it’s black.” Legend has it that those words were uttered by Henry Ford in his battle against change. 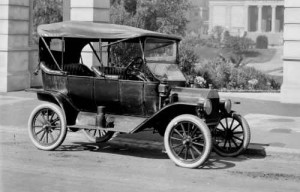 Surely we can learn something from the the man who brought the auto to the masses.  What can we learn about movements from Mr. Ford?

1) His primary goal was putting the automobile in the hands of everyone. So he made it…

2) He brought a number of innovations to the auto industry, innovations that shaped the industry for generations…but the innovations were in service of those three goals. Not innovation for innovation’s sake, but for a purpose. Everything from vanadium steel, to the fly wheel magneto to the left hand steering column to the two speed transmission. Cheap to build, simple to drive, easy to fix.

3) He made the Model T easy to modify. In other words, he made it simple enough that other people could modify according to their context and taste. With a few tools and a little time, the Model T could be transformed into a camper, a portable sawmill, a grain thresher, or a sporty racer. Auto historians credit the Model T with today’s multi-billion dollar aftermarket industry.

So if we want the Church to be a movement, we might consider making it simple enough that anyone can run it, or fix it.  Make it simple for people to get in and drive.  Not simplistic, simplistic dumbs down the mystery and relegates faith to the realm of the archaic.  But simple things can go deep, be woven through with mystery and make room for faith.  We need to innovate towards simplicity, solve complexities, let people drive.

If we want the church to be a movement, we will make wise decisions about what needs to be the same for everyone — maybe it isn’t the color, but we need unity in some core areas.  But we will also allow — not just allow, encourage — contextual modifications.  The church need not, should not look the same in every context.

By the way, Steve Lutz’ great blog post on campus ministry initially got me thinking about Ford’s T.  Click Steve to read it.