Dec 11th 2012
Merry Christmas.  When we wish someone a merry what are we wishing them?  I looked up the word and I found descriptions such as this:  Full of gaiety or high spirits, mirthful, marked by festivity, lightheartedness, uninhibited enjoyment of frolic or festivity, the stimulation of conviviality, heedless gaiety and an exhilaration of spirits.  Now I have to be honest, I’m not sure what “uninhibited enjoyment of frolic would look like” and I’m not sure I want to find out.  To take the honesty a step deeper, I’m not certain, but it may be that  that Baptists are only allowed to stimulate conviviality in the privacy of their own homes.  I’ll get back to you on that. 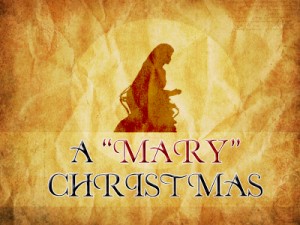 But really who wouldn’t want a merry Christmas.  I love the times when I get together with friends and can laugh till my belly hurts.  I love the relaxed time with family where we are just having fun together, like dinner around the table when all my kids are home.  I grin just thinking about it.  I’m not certain that Lynn would agree, but I think it’s about as stimulated as our conviviality gets!  Merry Christmas indeed.
But if we want to get back to the roots of Christmas, the very dna of the Christmas message, it may be less about having a Merry Christmas and more about having a Mary Christmas.  If you have been with us at Calvary we have been talking a bit about the time when Jesus was  born.  In Mary’s day, the most important man in the world is Caesar Augustus. He’s the emperor of Rome, and at some point the Roman Senate declared him the Son of God.  In fact on ancient Roman coins you’ll see that phrase: son of God. When Augustus seized power, he ended the civil wars and power games that were destroying Rome from the inside out, and he conquered much of the country around Rome, so they called him the bringer of peace.  You may have heard the phrase Pax Romana, the peace of Rome.  But the peace of Rome was a violent, horrendous peace.  Thousands of people were crucified.  Rebellions put down with inhumane force.  Men, women, and children killed.  But for Rome Agustus was the heart of Rome’s gospel, Caesar was Rome’s Good News.In fact there’s an inscription, from Rome, near the time when Mary would have been a little girl. This is what they say about Augustus: “By sending Augustus as a savior for us and to those who came after us, to make war to cease, the birthday of the god Augustus, was the beginning for the world of the good news that has come to men through him.”

But then this heavenly messenger comes to her and tells her that in her womb will be formed, the real Son of God, from her womb will be born, the true giver of peace, the
real Savior is coming. And this hope, this subversive begins to form in her heart, that there is something better to live than the good news of Rome.

The word subversive means the attempt to overthrow or cause the destruction of an established government.  Do you understand that this is the language of the resistance. Christmas is the start of a revolution.  When a host of angels announced the Jesus is the bringer of peace, they are saying there is no peace in Rome. When you are told to told to name the boy Jesus, for he will save his people from their sins, you are saying that Augustus is not the savior of the world.  When you say that birth of Jesus is the good news, you are saying that the birth of Augustus is not the good news.

And what does it look like to join the revolution?  Where does it start?  It starts with the very first words of the very first Christmas song, a song sung by Mary.  The words are, “My soul magnifies the Lord.”  You can read the whole song in Luke 1:46-56.  But for the moment just let those words settle in your heart.  What would it look like, this Christmas for you to magnify the Lord?  To diminish everything else that you magnify in your life, and let Christ be huge.  That would be a Mary Christmas.