A Scary Offer of Life 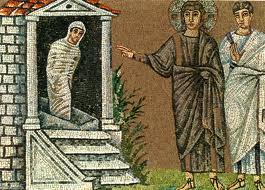 It’s not the actual Easter story, it happens more than a week before Easter — but it’s Easter Applied. Jesus intersection with Lazarus gives us a peek into the chapters after Easter, as if to say, “This is what life will be like when resurrection power is let loose in the world.

The image of Jesus standing in front of the tomb of Lazarus, — fervently angry to the core of his being, raging at the abnormality of death and sin and sickness and sorrow and grief, an abnormality that had become normal — is a portrait of our champion, the champion who came to give us life.  (Listen to

The question is, do we really want, are we ready for LIFE.

A few years back, a guy named John served a network of churches in Minnesota. One of his jobs was to travel to little rural communities to do funerals where they didn’t have churches. He would go out with an undertaker, and they would drive together in the undertaker’s hearse. One time, they were on their way back from a funeral, and John, was feeling quite tired. He decided he would take a nap. Since they were in a hearse, he thought, Well, I’ll just lie down in the back of the hearse. Sounds a bit creepy, but trust me, true story.

The guy who was driving the hearse pulled into a service station, because he was running low on gas. The service station attendant was filling up the tank and he was kind of freaked out, because there was a body stretched out in the back. While he was filling the tank, John woke up, opened his eyes, knocked on the window and waved at the attendant. John said he never saw anybody run so fast in his whole life.

That day (captured in John 11:1-46) when Lazarus walked out of the tomb — the crowd divided into two groups in John 11:45-46, it reports that many believed in Jesus, but others went away.  You know where they went?  They went to the religious leaders to tell them that they needed to take care of Jesus — because dead people just can’t be doing that!  They were scared…scared of the life Jesus represented and scared of the life Jesus offered.

Sometimes God’s offer of life, scares us. We want it, but we’re afraid to give ourselves to it.  So what will you do?  Believe?  Or go away?