In his book, “Authentic Faith” Gary Thomas shares the story of Mike. 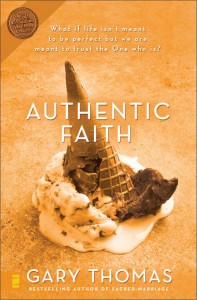 When Gary arrived on Western Washington’s University campus in 1980, Mike Dittman was the most dynamic christian he’d ever met. Mike was several years older than Gary; already a leader in the college ministry. Mike had everything, charismatic personality, great athletic ability, as well as being a skilled worship leader. He could lead you into the presence of God like few you’ve ever met. He was sought out at lunchtime. Everyone wanted to be like Mike and be with Mike.

Following graduation Mike served as a campus pastor and then enrolled in graduate studies to become a counselor. Then he started working for a local church. He’d been there a number of years when finally an intervention of sorts took place. Men whom Mike respected and loved, confronted him and said… “Mike you’re very competent. Very insightful. A dynamic leader. A guy who inspires admiration and respect. But you’re also too blunt. You hurt people with your words, you lack compassion and empathy and kindness.”

Mike was devastated, but in a good way. Not one of the positive traits mentioned by these men was a fruit of the spirit and he found himself praying. “God I wish I was a little less dynamic and a little more compassionate.

A year or so later, after a morning workout, Mike collapsed on the locker room floor. A brain hemmorage almost took his life… it was touch and go, but doctors were able to keep Mike alive… but after this, he was a whole different Mike.

His Hollywood handsome appearance was gone. Half his face droops and is pulled over to one side. He can’t sing anymore or play his guitar, so there’s no more leading worship. In fact for a time, his speech was so slurred that he couldn’t teach. He was humbled in just about every way that an ambitious man can be humbled. After months of grueling physical therapy Mike was able to return to a somewhat normal life.

But it wasn’t so much the physical therapy that God was interested in as it was the spiritual therapy. Along with the devastating effect on his body came an incredibly life-giving change in his spirit. Now years later, Mike’s ministry has never been more productive. He started a fantastically successful department of counseling at Philadelphia Biblical University, which has grown from a handful of students to hundreds…

People fly in from all over the country to meet with Mike. Pastors who’ve fallen, broken marriages, messed up kids. Mike’s seen it all, whereas before his focus was on the masses, Mike now specializes in healing hurting hearts, one at a time. If you asked Mike he would say that the brain hemmorage took a lot away, but it gave far more in return.

I love how Gary Thomas describes him. He writes,

Mike is now the type of guy whose spirit invites you to quiet your heart, get rid of all pretenses and revel in God’s presence. I think the main difference is that in college, when I was arnd Mike, I wantd to be like Mike. Now after spending time with Mike, I want to be more like Jesus.

So ask yourself, “When people spend time with me…do they want to be more like Jesus?”