I could call this post — “The Sweet Waters of Vindication” but it’s also wilderness experience #2 in my series.

There is a story in the book of Numbers about Moses.  I am fascinated by the life of 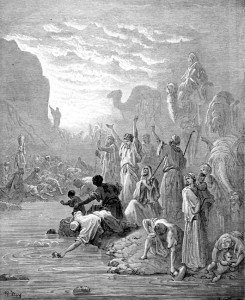 So the story — It takes place in the wilderness.  Moses is leading the people from slavery in Egypt to their promised land but the people miss their door of opportunity because they don’t have enough faith to confront the giants in the land.  (Which by the way brings up another wilderness principle: Sometimes the quickest way to a wilderness experience is to run from your giants.) So God decides that the people are going to spend a generation in the wilderness.

Now think about this, put yourself in Moses’ sandals.  You had enough faith to go into the land.  You wanted to go after those giants.  But the people wouldn’t follow you and now you get the same wilderness experience that God is giving to everyone else.

To make matters worse, in the wilderness, the people start complaining about Moses’ leadership!  Like their lack of faith was his fault.  They are murmuring, grumbling and complaining.  You know what I think?  I think sometimes Moses prayed, “Lord the wilderness wouldn’t be so bad without these people!”

So the story — It’s recorded in Numbers 20.  The people are grumbling and complaining about the lack of water.  So Moses goes to God and God gives Moses a plan.   “Moses, I want you and Aaron to go over to that big rock.  I want you to call the people of Israel to gather around the rock.  Then I want you to speak to the rock and water will gush out for the people.

So Moses and Aaron went over to the big rock.  They called all the people to gather around.  Then Moses raised his staff high up in the air and he struck the rock and water gushed out and the people drank.

Mission accomplished, right?  Wrong.  The Lord spoke to Moses, “Because you did not trust me enough to honor me as holy in front of the people, you will not lead the people into the promised land.”  Whoa.  Speak to the rock.  Strike the rock.  Patatoe Pototoe.  What’s the difference?

I remember thinking through this story and asking the same question, “God what is so bad about Moses striking the rock instead of speaking to the rock.”  God brought to my mind the words “the desire for vindication leads to failure.”

Imagine you are Moses.  You don’t want to be in the wilderness.  You are here because of other people’s mess.  Meanwhile you are giving and serving and all you ever get from them is whine, murmur, grumble, whine, complain. Why did you do this Moses?  Why didn’t you do that Moses?  We would be better off if you had left us in Egypt Moses.  What makes you think you are our leader Moses?

Imagine God gives you this opportunity.  All the people of Israel are gathered around you, thousands upon thousands.  The crowd goes way back.  If all you do is speak to the rock, nobody will know the part you played in bringing the people water.  But if you raise your staff up high above your head and then strike the rock…?  What only a few hundred might have heard, tens of thousands might see.  And you will be vindicated.

Everyone will know that you were right.  No one will complain about your leadership, your decisions, your wisdom, your direction.  Your.

So next time God says speak to the rock — obey me behind the scenes, serve me where few will notice — speak. Remember Moses, the waters of trust and obedience are far sweeter than the waters of vindication.