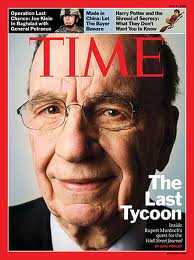 He has been listed multiple times in the “Time 100” as among the most influential people in the world. In 2010 Forbes ranked him #13 in their “World’s Most Powerful People” list. Oh yeah, he’s rich too.

But this week the 80-year-old Rupert Murdoch was grilled by British lawmakers about his role in the phone-hacking scandal. When pressed about who was responsible, Murdoch demurred, stating that “the people that I trusted to run it and then maybe people they trusted” had failed him.

Whether or not Murdoch knew about the alleged practices is up for debate — his organizational universe is huge — but what seems to be clear is the governing hunger of Murdoch’s heart. The News Corporation (Murdoch’s company) developed a “whatever-it-takes-to-win” culture that championed success and aggression. As reported in the New York Times, Rupert Murdoch’s defining characteristic was the way he treated business as a life or death battle for power and success.

Murdoch has never just been satisfied with besting the competition, as most decent businessmen are. He’s not truly happy unless he has his foot on a competitor’s neck and is pressing it downward. Felix Salmon, a blogger for Reuters, unearthed testimony about an executive who ran one of Murdoch’s more obscure divisions. ‘I will destroy you,’ the man told a competitor, according to the testimony. ‘I work for a man who wants it all and doesn’t understand anybody telling him he can’t have it all.’

The whole thing leaves me with two questions:

1) How do we turn around a culture — speaking here of the broader human culture — that so strongly values success that it encourages companies and organizations to operate without an ethics scorecard?  Think Wall-Street, banking scandals, and Enron.

One of my favorite quotes on worship by C.S. Lewis is…

If I find in myself a desire which no experience in this world can satisfy, the most probable explanation is that I was made for another world. If none of my earthly pleasures satisfy it, that does not prove that the universe is a fraud. Probably earthly pleasures were never meant to satisfy it, but only to arouse it, to suggest the real thing. …I must keep alive in myself the desire for my true country which I shall not find till after death. I must never let it get snowed under or turned aside. I must make it the main object of life to press on to that other country and to help others to do the same. All your life an unattainable ecstasy has hovered just beyond the grasp of your consciousness. The day is coming when you will wake to find, beyond all hope, that you have attained it, or else, that it is within your reach and you have lost it forever.”

2) So here’s the second question: If nothing changes in your life, when ‘that day’ comes will you find that you have attained it, or lost it forever?

Oh wait — a third question:  Should I buy my next Bible from Zondervan?