What Are You Aiming At?

I believe in setting goals; one of the lessons I’ve learned in life is that if we aim for nothing.. we’ll get it.  I’ll never forget one morning, when I was about 13.  It was the opening morning of duck season, and 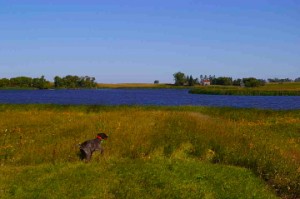 I was alone in a slew (that’s wetlands for anyone who did not grow up in South Dakota — thank tall grasses, reeds, and little pockets of water.) patiently waiting for the ducks to start flying in.

I shouldn’t say I was patiently waiting, actually I was quite impatient.  So I began playing with my gun — a single shot with a hammer.  Yep I was playing with the hammer, pulling it back, letting it click into place, releasing it, pulling it back. One time I forget to release it, and left it cocked; forgot it was cocked and a moment or two later, pulled the trigger.  The gun roared, and scared the.. whatever out of me as the gun went flying through the air to land about 20 feet behind me.  My heart quit beating.  Dad was too far away to see what had happened, he just heard the shot.  But I have a sneaking suspicion he knew
what had happened as he hollered out in his deep voice, “Did you get it Dan? Did you get it?”  There was no “it” to get, but I guess you could say I got what I was aiming at — nothing.

Doesn’t matter what area of life we’re talking about; career, family,  spirituality, finances, sports, church, school; aim at nothing and that’s what we’ll get.  So if we want to experience Kingdom success, it would be wise to ask ourselves, “What’s the goal?  What’s lined up in the sights of Jesus-followers?

What is the mission?  What are we aiming at? This life that we seek is a life from the heart. 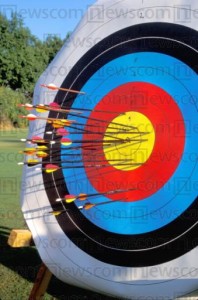 I don’t mean it’s just an emotional, touchy, feely kinda life.  It may be emotional, it will be experiential, but the reality is it will be more…for our heart Prov. 4:23 says is the very wellspring of life…anything that makes life worth living flows out of your deep heart.

Oh yeah — and maybe this is for a different blog.  The most vital part of your goal setting process might simply be to figure out what you will STOP aiming at.