What Are the Chances?

It was the 50th anniversary of Laura’s grandparents.  Every good birthday party has helium filled birthday balloons.  At the end of my childhood parties, we would open the balloons, breathe in the air and talk like 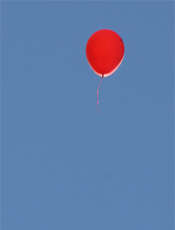 Donald Duck!  Laura had a different idea.  She took one of helium filled anniversary balloons in one hand, a marker in the other and she wrote a message on a card.  On one sides she wrote, “PLEASE RETURN TO LAURA BUXTON.”  On the other side she wrote her address.

Laura let the balloon go from her grandparent’s home in Staffordshire, England.  The balloon came to rest 140 miles away in Wilt, England.  Not all that big a deal except that it landed in the yard of another family named BUXTON, who had a 10 year old daughter named LAURA.

So “Laura #2”, wrote a letter to “Laura #1” – After the first Laura got the letter, the two girls decided to meet, wouldn’t you?  When they did, they were surprised to discover more similarities:  They were the same height, had the same hair color, and they each had brought, their pet guinea pig to the meeting.  And they both left behind their pet rabbit and their 3 year old black lab.  That’s right two Laura Buxton’s, two guinea pigs, two rabbits, and two black labs.

Now what are the chances of that?

You might expect me to have a point.  Not really, either it’s an interesting coincidence, or God has a pretty cool sense of humor.  I think the latter.  Take some time this next week and keep your eyes open for signs of the God who is filled with joy!