As each party — did you ever wonder why people would put political and party together in the same sentence — puts the finishing push on their story and election day looms large,

I thought I would give my blog readers a few Biblical guidelines for Christ-followers.

OUR PRIMARY CITIZENSHIP IS NOT HERE:  It’s said more than once in the Bible, but no one says it more clearly than Paul, “Our citizenship is in heaven.” (Philippians 3:20).  In 2 Corinthians 5:20, Paul calls us ambassadors for Christ, which again has this sense of an elsewhere allegiance.   U.S. law says that if you were born in the U.S. you are a U.S. citizen for life, so it’s not illegal to vote…  but I wonder how worked up we should get about it if we do?

IF YOU ARE BLUE OR RED YOU’RE DEAD: Sorry the rhyme popped into my mind (did it again) and I couldn’t get it out.  What I mean is this: If your primary identity if found in your political party you’re on track to miss life.  Jesus said that his followers would be known, not by the color of their states, 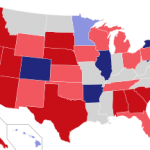 nor by the votes of their booths, but by the love they have for each other.  If my Facebook news feed is any indication it is not easy to be known for our love for each other and be passionate about our platform.

THE CENTER OF CHRIST’S ATTENTION: Is not and will not be found in the halls of political power.  Christ’s great interest in the world today is the church.  When Jesus is seen in the opening pages of the biblical finale, he is not seen walking through the halls of the great universities, or sitting on the thrones of political power.  He is seen walking in the midst of His church.  If you want to be where the action is in the days when eternity is on the line, invest in the church.  The church is the bride of Christ, in all her disglory.  He sees us as we could be, not just as we are…and he knows that His bride, His body, His church is the hope of the world.

BE WARY OF OUR BENT TOWARD POWER:  Specifically power we can control.  When the church gets cozy with the power of government, it rarely seems to go well for the world.

MAKE A COMMITMENT TO FULFILL YOUR CHRISTIAN (POLITICAL) DUTIES:  Chief among those duties is to pray.  The Bible doesn’t say that it’s a sin to not vote, but it is clearly a sin to not pray for those in governmental authority over you.  Next week we will know for whom we are called to pray.

REALIZE THAT ON ELECTION DAY THERE MIGHT BE SOMETHING EVEN MORE IMPORTANT THAT GOD CALLS YOU TO DO THAN VOTE.  I don’t know what that might be…I’m just saying that it might be…

Finally, some of you might feel that my guidelines do not take seriously the right, responsibility, and value of voting.  You may be right, especially on the value part.  I’ve gone through enough presidential elections — each one labeled as the most important election we have ever faced — to wonder what difference was made from one party (there’s that word again) to the next.  I know there are important issues about which Christians are passionate.  I just don’t see government making a difference.  I think our only hope to make a credible, lasting difference in our communities, and in our country, lies in Christ-followers loving Christ with all their hearts.  As a whole we don’t, not at the moment at least.  There are too few of us who can say like Paul, “I count everything else as rubbish compared to the surpassing greatness of knowing Christ.”