US Economics & The Church

The following quote from Dave Ramsey is making the rounds lately, 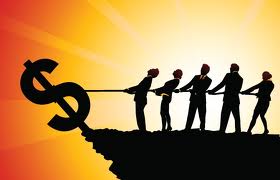 If the US Government was a family—they would be making $58,000 a year, spending $75,000 a year, & are $327,000 in credit card debt. They are currently proposing BIG spending cuts to reduce their spending to $72,000 a year. These are the actual proportions of the federal budget & debt, reduced to a level that we can understand.

I’m not an economist.  I’m not a stock analyst.  I’m not a doomsday prophet.  I’m not even that great with my own personal finances.  But here are a few thoughts anyway…

1) This isn’t a democratic problem or a republican problem and it requires something more than a backroom political deal or a tea-party solution.  It’s our problem. Lynn and I have discovered something during the years of our struggling with issues — sometimes financial — when the issue is between us, every potential solution feels like an attack.

Picture two people sitting at a table across from each other with an issue that needs a solution sitting in the center of the table.  Every time one of the people at the table offers a critique or even a solution to the issue, the words come across the table like they are directed at the other person.  This raises the defensiveness level and makes solutions hard to find.  The only solution is to have both parties move to the same side of the table so that they are attacking the problem without attacking each other.

2) Christians should be leading the way out of the problem — by repenting of greed and taking a greater responsibility for serving those in need here and around the world. Forgive me for using inexact statistics but they are not far off and they paint a picture of where we are at.  Imagine that the average american Christian gives about 3% of their income to the church and spends 97% on self.  Then imagine that the average american church gives about 3% of that income to serve those in need outside of their walls and spends about 97% within the four walls.

I don’t know.  I’m probably wrong.  But I can’t be any more wrong than we’ve already been…