I’ve been watching the Tour De France lately.  Don’t know why.  The last bike I rode, I rode one-way, then called Lynn and asked her to come pick me up.  I’m not a huge Lance Armstrong fan, though I have 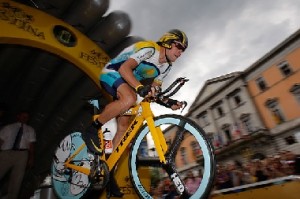 to admit, it tickles me a little bit to see the French worry that he might win again.  But I’ve been learning some life-lessons through the Tour.

For example, you could get beat every stage and still win the tour, as long as it’s not the same person beating you every time!  On the other hand, you will never win if you never distance yourself from the crowd (the pelaton).  Everyone in the pelaton scores the same.  Some people are good in the mountains, some in the sprints, even in the Tour, the team matters.

But here is the main life-lesson the tour is illustrating for me.  The tour is won on the uphill climb.  It’s very difficult to gain time going downhill.  On the downhill everyone gets to enjoy gravity’s pull and the upper limit of speed is limited to some extent by safety and the conditions of the road.  But going uphill strength, condition and the perseverance of will determine the speed.  Sooner or later, the race is won going uphill.

Few of us live for the uphill climbs of life.  We would rather enjoy the downhill moments where all the conditions are right for low-effort speed, but the greater gains come in the uphill seasons — as long as we have good strength of mind, condition of heart, and perseverance of will (don’t give up).  So when James (the brother of Jesus) wrote “Consider it pure joy when you fall into seasons of difficulty,” what he meant was, “the race is won going uphill.”

Are you in the uphill portion of your tour?  Don’t give up.  Now’s your chance.