Last Saturday, we celebrated State Patty’s day in State College.  Crowds of people descended upon the bars for 16 hours of alcoholic-induced partying.  Which made me think of “the tipping point” concepts described by Malcolm Gladwell in his book of the same name. 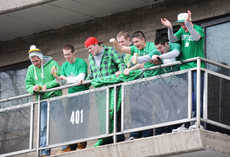 Now I tend to be attracted to numbers. I’m not talking about complex mathematical equations, numbers as in crowds. As a communicator I get energized by crowds. As a pastor I want to see crowds of people become connected in smaller communities where they can find support, friendship and growth. As a citizen of the Kingdom of God who is in love with Jesus and the city where He has called me to live, I want to see multitudes of people encounter Jesus.

There’s nothing wrong with being attracted to numbers — it’s not about counting people, it’s simply about realizing that people count.

But I think I veer off course when I am contemplating the strategies needed to help multitudes of people encounter Jesus.  My default is to think that it takes numbers to influence numbers. But it seems like Jesus thought that when it comes to the process of transformation — individual and city-wide — quality matters far more than quantity.

The words that changed D.L. Moody’s life were spoken to him by a man passionate about crowds. He said, “Moody, the world has yet to see what God can do with one person fully committed to Him.” Jesus loved the whole world and drew significant crowds but he invested his life in 12 disciples (11 were fully committed) and couldn’t we say that those 11 had a significant part in changing the world.

Malcolm Gladwell’s, book The Tipping Point is a study of how organizations change, how people are influenced to change. How does a system reach the “tipping point” whereby people and culture are transformed?  Gladwell documents that it takes no more than six children in a school to begin wearing a certain brand of sport shoe to reach the tipping point whereby in just a few days a hundred children will begin wearing that same brand of shoe.

Don’t get obsessed by the number, but what if Jesus and Gladwell are right?  What if a small group of people fully committed can bring an organization or a city to a tipping point of change?

Then the question in our city is which 6% will have the highest quality of commitment to their cause?  Which 12/11 will band together through the thick and thin of full commitment?  If 6% of the people in a city — or a church for that matter — become 100% committed to making Jesus the tipping point in our region, what would happen?

State Patty’s Day is a local (Penn State student created) knock-off of St. Patrick’s day which calls students to about 16 hours of alcoholic excess.   It’s a mess.  This year, a group of folks from Calvary and a couple of other campus ministries went downtown into the heart of State Paddy’s day and gave away free hot chocolate, prayer-walked, and helped drunk people find their way home.  In addition we did a reverse confessional booth — we confessed the sins of the church to those who aren’t Christians — and had multiple opportunities to help people encounter Jesus.  My guess is that there were under 50 people involved in this State Paddy’s day outreach.

So I was just thinking what would happen if next time around — we got 6%.  For the sake of easy numbers, let’s guess that 10,000 students were downtown drinking.  What if next year we have 600 people prayer-walking, helping drunken students find their way home, giving hot-chocolate, and talking to people about Jesus?