The One By One Initiative

Over the course of the last decade or so, I’ve heard more than one church researcher (like Aubrey Malphurs) make these two statements, 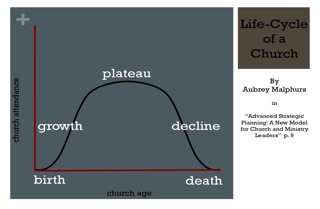 There is ample evidence for both statements. Every year 4000+ congregations die. They close their doors and the building gets sold for unique condo’s or an antique store. This is not necessarily a tragedy. Though how churches die is sometimes a tragedy, the end of a congregation’s life, doesn’t mean that the church that Jesus is building is somehow less vibrant or healthy. If the church is more organism than organization then death is natural part of the cycle.

Yes church congregations have a natural life-cycle. You could say that like people a church goes from birth, to growth, to maintenance to retirement to death. But unlike people a church congregation can have a reboot. If it occurs, it usually occurs somewhere in the growth phase (during the first 15 years).  In some traditions, it might be called a revival. In other traditions, a relaunch. Sometimes it simply comes with a revisioning of the mission and the goals of a congregation.

That’s where we find ourselves at Calvary. In 1995 we started a revisioning process at Calvary. We called it “Vision 2000” and we were asking the question, “Who are we to be as we head into a new millennium. In 1998 we started to get a new mission statement and new goals into place and a new season of growth was upon us. From 1998-2001 we grew by almost 250%. It was in 2002 that God further refined our vision with the calling to build a church without walls and from 2002 to 2013 we again grew by almost 100%. From 1998 to 2013 we went from 300 people in one worship gathering, in one place to close to 1300 in eight worship gatherings in four places. 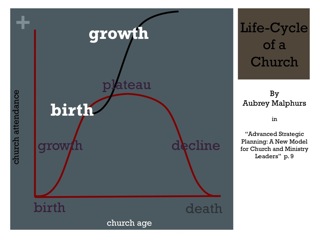 From 1998 to 2013…that’s about 15 years…which means we either consolidate what we’ve done and get ready for retirement…or we start another life-cycle. We don’t believe that God is done with us yet. We believe that He has given us a unique opportunity to be part of a unique mission in a unique place. Our One By One Initiative is our first steps into that new cycle. You could imagine an extreme home makeover that gives a family new hope. Or perhaps imagine a company going through a strategic relaunch. But perhaps the best metaphor is that of labor. Something new has been conceived in our midst and we are in the first stages of labor and delivery.

Over the course of  the next few weeks, I’m going to do a series of blog posts talking about this new vision. I realize that not everyone who stops by this blog, is a part of Calvary, but you are welcome to follow along and pray for a good birth. Let me close this one by giving you the opportunity to watch a video that gives a glimpse into Calvary’s next chapter.