We spent time at our staff meeting today praying for President Obama and our country, then all 15-20 of us crammed into my office to watch the events unfold.  I didn’t get to hear Rick Warren’s prayer but God 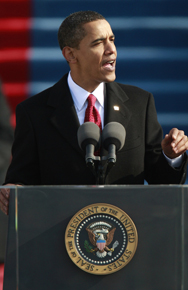 did and when it comes to prayer, that’s probably the main thing.  Most in the room didn’t stick around for the poem, which means that they missed the benediction — hard to beat, “red man, get ahead; yellow man get mello” — but we all heard the oath and the speech.  They could have practiced the oath a bit more, but the speech was powerful.

Some random thoughts from the day…