That’s the Story of My Life

When I was a kid growing up, Anna was just crazy Aunt Anna. She seemed ancient to us. She was never married, lived with her brother, equally odd Oscar. (He was a scary driver.) 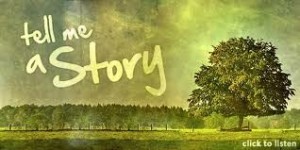 When winter blizzards would force me to spend the night in town, so I could get to school the next day, I would stay in a bedroom that had piles of junk from floor to ceiling with just a path from the door to the bed. She made the best rice mush, played a mean game of whist, and frequently said uffda.

When my great Aunt Anna died about twenty years ago, my father was the estate executor. So we had this amazing opportunity to go through her house; go through all her stuff. They were collectors of all sorts of stuff; stacks of magazines all over the house, cupboards full of old tv dinner aluminum foil plates, right next to antique china that we would find was worth a small fortune.

But I think I found something even more valuable than her china. That summer we sorted through her stuff — I heard her story. A scrapbook brimming with memories of WWII, letters to young men fighting the battle, obituaries of friends who never came back. Gas ration stamps, war bonds, food ration stamps. Letters to family left behind in Norway. Certificate of Baptism and confirmation.

She was a woman who faced great loss. A woman who made great sacrifices for her friends, her community and her country. I wonder if she ever struggled with a lifetime of singleness? She was a person of deep Lutheran faith and often someone who was the life of the party.

Sometimes we look at chapters in our lives and we begin to think that’s my whole story. Did you ever hear someone say, “That’s the story of my life?” Did you ever say it?  We usually say it after a failure or when circumstances are less than we had hoped.  We say it in the midst of the hard chapters. Sometimes it’s said in despair.  But you don’t know the whole story, not even your own. Because you aren’t the author God is.