On Christmas Day, I had the opportunity to speak to about 1500 villagers from the area surrounding the 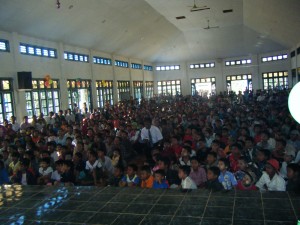 I’ll be very honest.  I was discouraged when I finished.  Between the steady rumble of the kids speaking while I spoke, and the interpretation-pause that came every 2-3 sentences, I didn’t think a single word I spoke had made a difference in anyone’s life.  When I finished I sat down and told Lynn, “That was a massive waste of time.” Meanwhile I was thinking that it was a good thing we were feeding them so that they wouldn’t walk away completely empty-handed.

I was wrong.  I had forgotten the life-power that is released when the Spirit of God connects with the Word of God.  The next day a Muslim man wandered back to the orphanage.  He asked to speak to one 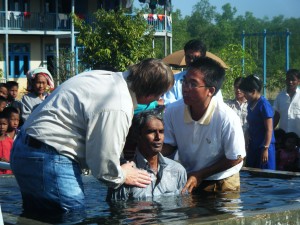 of the leaders.  David and his wife invited him onto their porch and he started sharing his story.  He started with the words, For seven years I have been searching for God, yesterday I came here and listened to the talk and I realized that Jesus is the One.  I want to give my life to this one called Jesus. I had the humbling honor of baptizing that man the following Sunday.

I was wrong.  I had forgotten the life-power that is released when the Spirit of God connects with the Word of God.  Brother Sho Mough used to be a Buddhist monk.  When I was in Myanmar over a year ago 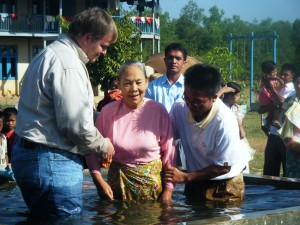 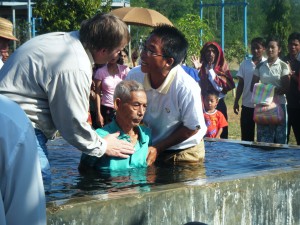 he had just become a Christian, but his parents were long-time committed Buddhists.  They wanted nothing of their son’s Jesus.  But they were willing to come on Christmas Day for free food.  The next day, they told their son, “Yesterday after we listened to the man talk about Jesus, we decided that we want to be followers of Jesus like you.” I had the humbling honor of baptizing both of them the following Sunday.

I often tell people that I work hard and do my best because God deserves it, not because He needs it.  God is worthy of the very best that I have to offer in any given situation, but He does not need it.  He often will do more through my inadequacies than I can imagine him doing through my adequacy.  I often tell people that God doesn’t need my best — and sometime I even believe it.

It is amazing the life that can happen when the Spirit of God connects with the Word of God.