Someone Help Me — I’m a Baptist-Pastor

Okay it’s not quite the same as saying, “I play football for the New York Jets.”  It doesn’t have the same ring as, “I’m an IRS Auditor.”  But can you imagine what it’s like to be me?  When I introduce myself to people — specifically people who did not grow up in church, or for whatever reason do not understand all the finer points of “no we are not really like that church” distinctions — I am immediately at a great disadvantage. 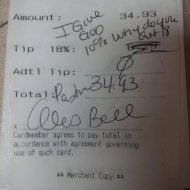 “So tell me about yourself?”  They ask.

I half-cringe when they ask me the next question, “What kind of church?” Why do I half cringe?  Because half of the people think of a little church named Westboro Baptist and they are a church which take the name Baptist even farther into disgust and disrepute than most Baptists have ever been able to take it…though we have valiantly tried. So I find myself saying, “I’m baptist, but not the kind of baptist that you initially may think of when you hear the word baptist…not those baptists.”

But now, I probably won’t even get to the “what kind of church” question.  People’s eyebrows will arch and their eyeballs will roll as soon as I say pastor.  “I’m a pastor.” It will be, “oh yeah pastor, like the pastor who left the waitress a note on the bill saying, ‘I only tip God 10%, why should you get 18%.’  Wow, so you’re a pastor.”

If  you didn’t hear about the pastor (actually a lady not a guy, not sure why that seems important to me, other than I’m trying to distance myself in any way I can) who did this.  It’s been all over the social-media universe.  A pastor ate at Applebee’s with a group.  The group was large enough that an automatic tip of 18% was added.  Apparently the pastor felt that was too large a tip, so she crossed out the tip and left the note.  “I only give God 10%.  Why do you get 18%?”

Now I have all sorts of problems with this statement.  For example, the concept of the tithe (giving the first 10% to God) arises from the theological principle that everything I have belongs to God already. So when I tithe, I’m not giving God anything.  I’m actually celebrating what He has already given me.  I could also go to the passage in Corinthians where Paul says that God loves a cheerful giver…and what I know about cheerful givers is that they love to bless others.  Finally in our culture, it is recognized that we tip, at least in part as a payment for services rendered.  The tithe is not a payment to God for services rendered and to refrain from a tip is close to stealing from those who do render you services.

All in all, what’s really missing… is a spirit of generosity.

In studying the amazing growth of the church of the first century, Rodney Stark — a Princeton Sociologist — wanted to know how a marginalized, persecuted, often uneducated group of people were not only able to survive but thrive. He concluded, “A key reason was their willingness to sacrifice themselves out of love for each other and for their world.  This sacrifice released an explosion of light and heat the world had never known.”

I would rather be known for that…than 10% tips.

Somehow we need to get back to that kind of sacrifice.  Perhaps it could start with a challenge to the Christians in my own community to make sure that the waitresses at every restaurant in town are fighting for the Sunday-after-church crowd, because nobody tips like those crazy Christians.  I’m going to start there…but let’s not stop there.  Let’s redeem the name Christian (it originally meant “little Christs”) by so “sacrificing ourselves out of love for each other and the world” that we let loose a new explosion of light and heat that draws the world to Jesus.

Oh yeah, an Applebee’s waitress — not the one who waited on the pastor’s table — posted the receipt online.  She was fired.  One report indicates she was fired as a result of the pastor’s complaint about the receipt being posted online.  I think for awhile if someone asks me who I am… I’m just gonna be Dan.