Running Out of Gas

Yep, that’s me, walking a lonely North Carolina backroad in search of gas-salvation.  I did it again.  I ran out.  This time it happened on the way home from vacation.  I mean usually we go on vacation because we have run out of gas (metaphorically speaking), but I can run out of gas (literally speaking) almost anytime.  I have done it in many places over the course of my life.  It’s happened at home, blocks from home and states from home.  One time I had to coast down Pine 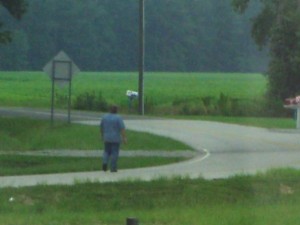 Grove Mountain to get gas at the station at the intersection in Pine Grove Mills.   You might have passed me by when I ran out of gas in the turning lane on Atherton St. between Facia Luna and the Unimart.  This isn’t a new addiction — I’ve struggled with it since my youth.  I suspect that someday when I’m 80 you might find me walking down a country road with a cane in one hand and a gas can in the other.

The most recent point of gas failure took place on a road in North Carolina.  I knew we were low.  I could tell because the little pointer thing had been on “e” for about a half hour.  I had passed by at least 2 or 3 gas stations while it was on “e” and as I passed one of them, Lynn asked me when I was going to get gas.

But I waited.  I thought I could make it to the next major intersection, “the gas will be cheaper there I told myself.”  Almost made it too — six miles short.  I felt it before I heard it — that sputtering feeling that indicates the car no longer has what it needs to keep going.  “Oh crud,” I thought.  “What?”  Lynn said.  “Oops” I thought “did I say that outloud?”  Lynn pulled out the triple aaa card.  We got it because of my gas addiction.  We’ve used it more than once.

We were on an interstate but happened to coast to a stop quite near a road that had 3 or 4 North Carolina houses on it.  So I went over the fence to see if I could get gas faster than aaa had promised.   That’s me walking down the road.  Nobody was home.  We waited about 90 minutes for our gas, which put us in the D.C/Baltimore area at rush hour.  I figure my gas indiscretion cost us about 3 hours.

So I know what you’re thinking.  That is so dumb.  Why in the world would you test the limits of the gas tank to that extent?  Why not just make a commitment to get gas when the little pointy thing says something 1/8 full?  At some point you have to stop anyway why not stop when you choose rather than when it is forced upon you?  You save time when you refuel regularly.  I know that’s what Lynn was thinking.  :)  (Though she was so gracious she didn’t say most of what she was thinking.)

Why do I do it?  I can’t blame it on my youth, I grew up with plenty of gas.  My father was not a gas miser.  I know that when the gas is gone, the machine quits.  Maybe there is just something in me that likes to test the limits, be in total control of my going and coming.  Maybe I’m just a bit foolish when it comes to refueling.

And most of you are probably thinking, “I would never run out of gas like that.”  But here’s what I’m thinking.  We do it all the time.  That’s why God invented the sabaath.  Because we have a lousy theology of limits.  We think we can do it all and refuel when we want, on our terms, when we have time.  And what happens is that we run our souls on empty too long.  We run our relationships on empty too long.  We run our dreams on empty for too long.

I can’t promise you that you will never see my jeep parked along the road, with me holding a gas can.  But now every time I get low on gas, I’m going to think about God’s sabaath rules.  Refuel regularly and consistently.  It makes the journey that much more enjoyable.