If you didn’t read the post yesterday, I’m defining Potluck Generosity as what happens when a team of people decides that together they will do what they can, 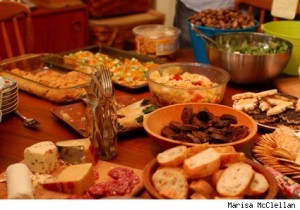 with what they have, in the moment they find the need.  Potluck Generosity is what is taking place when MANY people each give a LITTLE and together make a BIG difference.  MANY LITTLES = BIG.

I believe there are times when God will call an individual to make an extraordinary sacrifice.  When a person responds to that call, we celebrate.  Sometimes we even experience generosity awe.  In fact — forgive my theologically suspect statement, but — I even think great sacrifice even gives God a bit of generosity awe.  It is what He asked of His Son Jesus and when Jesus responded to the call that single act of life-giving generosity changed the world.  Something inside of us thrills to stories about sacrificial generosity.

But I’m pretty certain that — day in and day out — God’s preferred means of changing the world is through potluck generosity.  Everybody a part of the generosity team, everybody bringing something to put in the pot, many littles making a big difference.  You see this modeled throughout the stories of the Bible.  In Exodus 36, the people are challenged to give to build the tabernacle (house of God).  Each one was called to give as they were able.  Here is what verse 36:6-7 records,

6 Then Moses gave an order and they sent this word throughout the camp: “No man or woman is to make anything else as an offering for the sanctuary.” And so the people were restrained from bringing more, 7 because what they already had was more than enough to do all the work.

The people were restrained from bringing more.  Moses had to say, “STOP giving!” Why because they already had more than enough to do all the work.  MANY LITTLES = BIG.

32All the believers were one in heart and mind. No one claimed that any of his possessions was his own, but they shared everything they had. 33With great power the apostles continued to testify to the resurrection of the Lord Jesus, and much grace was upon them all. 34There were no needy persons among them. For from time to time those who owned lands or houses sold them, brought the money from the sales 35and put it at the apostles’ feet, and it was distributed to anyone as he had need.

They shared and there were no needy people among them.  MANY LITTLES = BIG.  Here is what I think.  I think the tithe (giving 10% of your annual income) was meant to be potluck generosity — the power of team giving.

– As of today, Friday the 13th of November 2009, over 8 million children under the age of 5 have died this year, the vast majority of them from preventable poverty conditions.

– If Americans who identify with the historically Christian church increased their giving to an average of 10% of income, there could be an additional $170 billion given to the church.

– One source estimates that $70-$80 billion would impact the worst of world poverty. $5 billion could end most of the 9.7 million under-5, global, annual child deaths. $7 billion would be sufficient for global primary education for all children.

If we tithed we would have too much money for the needs of global poverty. Somebody in the world would 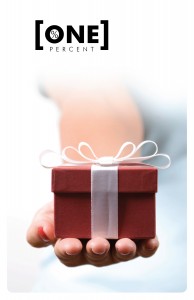 have to tell us “Stop Giving!” Problem is that we have come to think of something like a tithe as heroic sacrifice, when God intended it to be potluck generosity. MANY LITTLES = BIG.

This weekend those of you who show up at a Calvary gathering will receive a ONE% booklet. For the last two years we have responded to a challenge to give 1% of our annual income in a year end offering to serve kids around the world. It’s our form of potluck generosity. Read the booklet and start to pray about what God wants you to put in the pot.