When Jesus disciples asked him to teach them to pray, he taught them, “When you pray, say ‘Our Papa in heaven…” This prayer — we often call “The Lord’s Prayer” — was remarkable for one reason. It instructed the followers of Jesus to call God…Papa. Before Jesus, this nearness, closeness, intimacy-factor in relationship to God was not celebrated. So what if we are to view our relationship with God in terms of papa — child? What then?

Dave Johnson is the Sr. Pastor of Church of the Open Door in Minneapolis Minnesota. 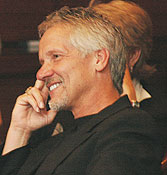 Steve is a great preacher…I have always been inspired by his sermons. I received his tapes regularly for awhile and used them as part of my own personal worship time. In the last 25 yrs. OD has grown from 150 to thousands. It’s a great church and he’s a great pastor. I attended Open Door a few times while I was in college..I played football with one of Steve brothers. I knew another brother fairly well because he’s the football coach at Bethel. I even had lunch with his father — another pastor — a time or two. But I’ve never met Dave.

16 years ago, before I came to Calvary. I tried. I wanted to meet him, to pick his brain about going to a church with a staff; how he prepared for preaching; what it took to see a church go from 150 – 5000. I thought I had enough connections to be able to gain access. I called. I left messages. I sent notes. I even asked a brother to intervene…but I couldn’t get in.

After awhile I quit trying.

He was too busy, too many responsibilities, too involved with what he had going on to find time to talk to me. You know what I don’t think any less of him. He’s an awesome preacher and leader, a Kingdom Builder. I don’t think he’s stuck up…he’s a humble man. As Calvary has grown, I’ve seen how impossible it is for me, to be there for everyone… Dave Johnson had limitations and he had to set priorities…and I wasn’t his priority.

For all who are led by the Spirit of God are (children) of God. And so we should not be like cringing, fearful slaves, but we should behave like God’s very own children, adopted into the bosom of his family and calling to him, Papa, Father. For his Holy Spirit speaks to us deep in our hearts and tells us that we really are God’s children.

It’s been good this week to just talk to my dad.  Maybe this week, you should schedule in some “just talk” time with Papa God?