t happened in Washington D.C. but don’t be fooled, it could have happened anywhere.  Beautiful music was played and no one listened.  A young man walked into the Metro station, long-sleeved t-shirt, 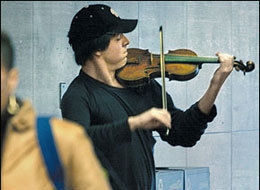 Washington Nationals baseball cap.  He pulled a violin out of his case and began to play.  He started with Bach’s “Chaconne” then moved to Schubert’s “Ave Maria.”  He played six pieces total — ending with a reprise of “Chaconne” one of the greatest classical pieces of all time.  He played exactly 43 minutes.

In 43 minutes exactly 1097 people passed by the musician with his violin.  It took 3 minutes and 63 people before someone actually looked at the violinist.  He didn’t stop to listen, but he did look.  30 seconds later, someone dropped a buck in the open violin case.  It took 6 minutes before someone actually stopped, stood against the wall and listened.  In 43 minutes, only 7 people stopped for at least a minute.  27 people gave money totaling $32 and change.

Do the math, 1,070 people hurried by without listening, oblivious that three feet away from them Joshua Bell — one of the world’s greatest violinists — was playing some of the most beautiful classical music on a 3.5 million dollar Stradivarius. 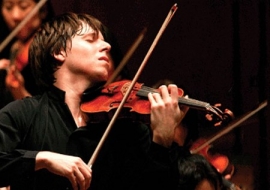 weeks later he was playing To a standing-room-only audience at the Music Center at Strathmore in North Bethesda. But on a cold January morning at the Metro Station he was making $32 and change while competing with the busy schedules of people on their way to work.

This story could lead to the pondering of many questions, like:

But here is the question that captivates my mind from this story, “How much do we miss in life because we do not take the time to listen?”  Time after time I will talk to people who are struggling in a relationship, and they haven’t taken the time to listen.  Lynn and I stood for 10 minutes on a bridge the other day, listening to the sound of water flowing over rocks.  It was like talking a 60 minute nap — so soothing.  How often do we say that we really want to hear the voice of God, but we just don’t have time to listen?  If there is any group of people in the world who should be known for their listening ears, it is those who call themselves followers of Jesus.  After all, he was known as “The Word.”  But I do not think that “great listeners” would come to the mind of most people if you asked them what they thought of Christians.

One interesting thing: If you watch the video of Joshua’s performance at the Metro, you may notice a 3 year old boy being tugged along by his mother.  The boy wanted to stop to listen to the music.  The action was repeated by several other child-mother combinations.   I wonder if that’s what Jesus meant when he said, “Unless you become like a little child, you will not enter the Kingdom of Heaven?”