My first church was in Grove City, MN.  For about five and a half years Grove City was my home.  Two towns over in Darwin resides The World’s Largest Ball of Twine. This amazing string thing stands 11 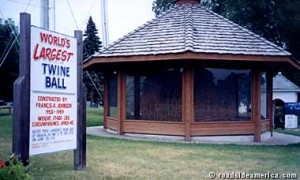 feet tall, measures 40  feet around and weighs 8.7 tons.  Francis Johnson spent 29 years winding twine into a ball that like the Energizer Bunny, just kept on growing and growing…  Johnson, a bachelor, (go figure) with a lot of time (and twine) on his hands, started his project in 1950 and didn’t quit till 1979.  “He was 74 years old,” says nephew Harlan and “he just couldn’t handle it anymore.”

At what point in his life did Francis realize he had a dream…a purpose…at what point did he aim his sights for the largest ball of twine in the world?

At least he aimed at something — that’s a step ahead of some of us.  I am a big believer in setting goals; one of the lessons I’ve learned in life is that if we aim for nothing.. we’ll get it.  I’ll never forget one morning, when I was about 13.  It was the opening morning of duck season, and I was alone in a slew patiently waiting for the ducks to start flying in.  I shouldn’t say I was patiently waiting, actually I was quite impatient.  So I began playing with my gun; a single shot with a hammer.  Yep I was playing with the hammer, pulling it back, releasing it, pulling it back. One time I forget to release it, and left it cocked; forgot it was cocked and pulled the trigger.  The gun roared, and scared the..whatever out of me as the gun went flying through the air to land about 20 feet behind me.  My heart quit beating.  Dad was too far away to see what had happened, he just heard the shot.  But I have a sneaking suspicion he knew what had happened as he hollered out in his deep voice, “Did you get Dan, Did you get it?”  There was no it to get, but I guess you could say I got what I was aiming at, nothing.

So what are you aiming for — in life?  The Living Bible paraphrase of I Corinthians 14:1 reads, “Make Love Your Greatest Aim.”   What would that look like in  your life if you made love your aim?

James 3:13-18 gives a decent picture of that target.  Make love your aim.  We could certainly do worse.