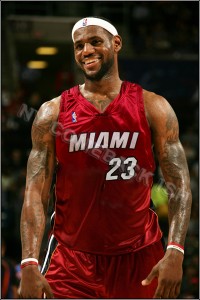 Not exactly a proven recipe for selfless maturity.  In fact for a 25 year old with millions of dollars and an entourage, he didn’t do too bad.  Honestly he  didn’t.

One more “honestly” — it was his right to leave.  That’s the purpose of contracts…they define your rights.  In fact, take it a step farther, I appreciate the fact that he didn’t leave for more money.  He just wants to win and he felt that leaving was a step in that direction.

So here’s my problem.  I have repeatedly told my sons that if they ever break up with a girl through a text message, I will personally break their fingers.  There is an honorable way to break up and long-distance texting ain’t it.  This is what I was thinking as I was watching — I know I can’t believe I watched — “The Decision.” I was thinking that someone should break Lebron’s fingers.  He broke up with the Cavaliers long distance.  Home-grown, home-town hero but his fans, his boss, his team had to hear his decision on ESPN.  I felt like I was watching ESPN’s version of the Bachelor.

So it’s not unexpected that Cleveland is not only bummed, they are angry.  In an open letter to the Cavalier fans, owner Dan Gilbert writes,

As you now know, our former hero, who grew up in the very region that he deserted this evening, is no longer a Cleveland Cavalier.  This was announced with a several day, narcissistic, self-promotional build-up culminating with a national TV special of his “decision” unlike anything ever “witnessed” in the history of sports and probably the history of entertainment.  Clearly, this is bitterly disappointing to all of us.  The good news is that the ownership team and the rest of the hard-working, loyal, and driven staff over here at your hometown Cavaliers have not betrayed you nor NEVER will betray you.  …You simply don’t deserve this kind of cowardly betrayal.  You have given so much and deserve so much more.  In the meantime, I want to make one statement to you tonight: “I PERSONALLY GUARANTEE THAT THE CLEVELAND CAVALIERS WILL WIN AN NBA CHAMPIONSHIP BEFORE THE SELF-TITLED FORMER ‘KING’ WINS ONE” You can take it to the bank.

Personally, I value loyalty.  My respect for Lebron would’ve gone up if he stayed in Cleveland.  I’m not sure I consider 7 years an overwhelming display of loyalty.  It was his right to leave, but he could’ve left with more honor.  If I was his father, I’d break his fingers — or at least bend them back really hard.