This last week my son Josh wrote a story about his experiences in Myanmar last Christmas.  I felt it was blog worthy so here it is…

MOM, HURRY UP I’M STARVING” This is what I used to say before I got a chance to go to Myanmar where people are actually starving. There are people begging for food on the streets because they don’t have a few coins to buy food. Going to Myanmar was a life changing experience. 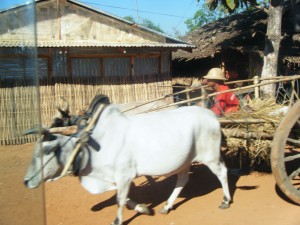 Right as we landed in Myanamar there was a huge group of people there to greet us and celebrate that were here. The next day as we drove to the Orphanage, I really saw how poor Myanamar is. There were all these people begging for money with with no shoes and no shirts. Seeing this got me pretty sad and I realized how rich we are to them. Then when we got into the city we started to see little kids with no parents, abandoned on the streets all alone, with no clothing on and when we saw this it really got me sad.

The funny thing is that when we got to the Orphanage, the children there seemed really happy.  I asked myself why they were so happy even though they had little possessions. We brought presents from home and when

we gave them to the kids it made their day. They were so happy for getting a good soccer ball, two footballs, coloring books, colored pencils, crayons and beanie babies. The tiniest things meant the world to them. The thing that made them the most happy was how we gave up our time to play and just hang out with them. They acted like we were royalty. On hot days they would fan us and hold umbrellas for us. Then when we would go to eat, there were kids fanning us to keep us cool, which I thought was awesome but we didn’t deserve getting fanned, because we were going there to serve them. While we ate chicken and rice, all they got was plain rice everyday!  So now I am better at not getting mad when I don’t get the food I want, because they have to eat the same thing every single day.

One day while we were there we gave adults in the village food because they didn’t get enough money to buy food for their family. All the parents were so afraid they wouldn’t get anything, that they were to the point where they were climbing on each other to get to the front.  It really made me think, while all the people in Myanmar are frantic to get food, people in America are frantic to get a good deal on a “T.V. or game console.”

Also their government is one of the top 5 strictest. Buddhist, Muslim and Christian religious groups get persecuted by them.  Also the chin people living in the northwest mountains of Myanamar are tortured and killed and put into forced labor. The government is accused of many human rights violations. After a cyclone hit they wouldn’t even let us bring them food or money even though many people lost their lives, their homes and had no where to live.

So as you see Myanmar and America are two COMPLETELY different places. People there have to beg for money to get food or sell some of their valuables to get a little bit of money.  But what I found at the orphanage is that when someone loves you, you can still be happy.  Our family is going to Myanmar again this year to hang out with the kids and help there instead of just doing a regular Christmas. Going to Myanmar will always be at the top of my list and i can’t wait to go this year and see the kids I got attached to.

So I don’t know if his story causes you to press pause…I just know that it did for me.