I suppose it happens every couple of years, but for some reason it just occurred to me this year… Halloween and Elections are fairly close together.  Was that planned? 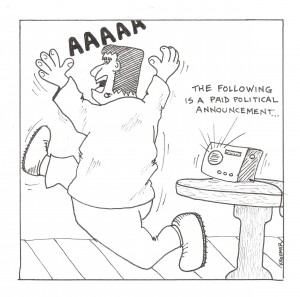 Or just some sort of cosmic irony?  Well anyway here are my top seven reasons why Halloween and the Elections seem to go well together.

1) When everyone is wearing masks, it’s hard to tell the good guys from the bad guys.

2) I’m not sure whether the goal is to scare people or give away free candy.

3) If you want to get Christians riled up, just make a declarative statement about either one.

4) Probably about the same percentage of people in our community are involved in both.

5) In the weeks leading up to both events, TV is filled with attempts to frighten us.  Just not sure which is more fear-filled, the political ads or Jason #7.

6) Both events give me a stomach-ache on the day after.

So let me finish this post by asking this question, “How do we make politics less scary?” Here are some possibilities…

What if we would only vote for the candidates who exhibit a measure of kindness?  You can fake integrity, a little harder to fake kindness.  Obviously the virtue of kindness would greatly reduce the negative campaigns.

What if we made a commitment to never vote a straight party ticket?  Christians should be the least party-ized people in politics.  Study the issues, study the people, pray about it and then vote.  Or don’t vote.

What if we were to keep in mind that the Bible says, “The king’s heart is in the hand of the Lord, like the rivers of water; He turns it wherever He wishes.”  Proverbs 21:1 Doesn’t matter who sits in the oval office of one of the greatest nations on the earth, God is still in control. Perhaps this would lead us to fulfill one of the key Biblical commands concerning government — pray for those in authority over you.

Having said all that… If a person, fully committed to Jesus, striving to live and love like Jesus, is living out their calling on Halloween night or election night, we cannot begin to image all that God could accomplish through them as they seek FIRST the KINGDOM OF GOD.  That’s really the issue, what kingdom are you building, who is directing your calling, and who has first place in your heart.  I don’t care if you are republican or democrat.  I don’t care if you give out candy or darken your lights.  I don’t even care if you wear a mask on Halloween night…if you care deeply about Jesus and the Kingdom of God, you will make a difference.  If Halloween has first place in your heart, you won’t be any more effective at changing the world, than you are if politics has first place in your heart.