I had a grandmother.  She was a little grandma.  In fact that’s what I called her, little grandma.  You might use nana, mima, mimi, gammy or gamma to distinguish one grandmother from the other.  In our family we used the creative titles, Little Grandma and Big Grandma.  If you would haven known them you would understand.  I have known and loved all my grandparents…but little grandma was a favorite.  I remember when I was just a kid and we would make trips to California, she would take us to Thrifty’s for an ice cream cone.  She always got us the discount tickets to go to Disneyland and then would usually spend the day there with us.  I remember sitting at her counter as she would special-order cook my breakfast.  She was full of love and life and patience.  We had good talks.  It was always good to go to little grandma’s house because it was always good to be with her.

But then she got Alzheimer’s — way to early.  I was in college when she started getting bad. 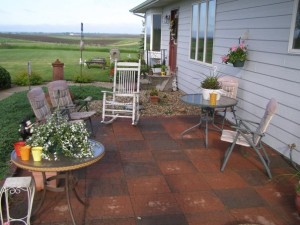 Grandpa refused to put her in a nursing home.  But as he took care of her, she kept getting worse, mentally and physically.  A few years before she died, they moved to a new home — the one in the picture — right next to the house I grew up in.  During those years, in that house, she was there, but not really.  She couldn’t communicate, I’m not even sure if she was aware of what was going on around her.  Not only were her cooking skills gone, she couldn’t even feed herself.  She was bed-bound.

It was always interesting to watch my kids when we went to Little Grandma’s house to visit.  They never  really know her — not like I knew her — they never had the chance.  But they always wanted to see her.  They would go into the bedroom and touch her hand, say hello and then after a few moments they would go and play.  When they left the bedroom, it was almost as though, she had left the house — out of sight, out of mind.   I and Lynn would talk to her a bit longer.  She wouldn’t respond.   After a few more moments I would go.

And the rest of the visit, it was as though she wasn’t there.   It was her house but nobody asked her to be the host.  It was her kitchen but nobody asked her to cook or even what she wanted to eat.  Oh there would still be occasions when someone would seek her out, usually my mom.  Some occasions where someone would talk to her as though she might respond.  In fact there were times when I could even work up the faith to think that if I would talk long enough, perhaps a glimmer of recognition of her Danny might come back.  But for the most part, once the ritual greetings took place, rarely did she cross my mind, until it was time for the ritual goodbyes.

It was her house, but it was easy to be there and never be aware of her presence.

It’s kind of like church can be if we aren’t careful, isn’t it?

Once upon a time, we knew He was there. We consulted Him with our decisions and asked for His help often.  Sometimes we would just sit and talk and it was good to be in His house, because it was good to be with Him.  But now we have our ritual hellos and our ritual goodbyes and the rest of the time…

Well It’s His house, but if we aren’t careful, we could be there and never be aware of His presence.

The only difference is…  He’s not Little Grandma.  He doesn’t have Alzheimer’s.  And He will not be ignored.   As John Piper loves to say, “God is an important person; he does not like being taken for granted.”  I know it’s also true that God does not need a house made out of hands, but just for the fun of it, for the awe-full joy of it, this weekend when you go to church, be aware of His presence.  When you pray, assume that He heard and listen for His response.  He might surprise you.