“In a show of unprecedented generosity a band of 40 american billionaires have pledged to give at least half of their fortunes to charity” — so begins an article in today’s USA Today newspaper.  (You can read the article here Band of Billionaires). Pretty 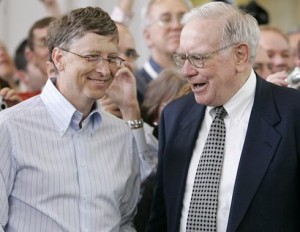 inspirational — in spite of the fact that if you give away 1/2 a billion, you still have 1/2 a billion — so far 40 people have signed the pledge.  (See The List here.)  Some names are familiar, some are not.

It appears the challenge is being sounded from Bill and Melinda Gates and Warren Buffett, so far they have contacted 70-80 of the richest people in America, in the coming days they will be spreading their challenge to India and China.  Those who say yes will be asked to contact others, small dinners around the country will spread the challenge.  Who knows how far this might go…

There is so much that I love about this challenge giver’s club.  I love the challenge.  I love the sense of community that is apt to form amongst these 40-50 people.   I love the generosity.  But I have to say I’m also a little bit bummed…

The church should be getting these headlines.  Not that it’s all about publicity, but remember that Jesus did say that our good deeds should cause people to praise Father God — for people to praise, they have to know.  From the beginning God determined that his people would be known as the people who bless others.  Prosperity theology has it half right — God does want to bless us — but the other so-important-half is “so that we can bless others.”

Consider this: In 2010 almost nine million children under the age of 5 will have died from preventable poverty conditions. Oh but there’s nothing we can do about that…the need is too great… did you know that if members of historically Christian churches in the United States were giving an average of 10% of their incomes in 2010, there would be an additional $160 billion given through church channels. (Check out www.emptytomb.org)

It’s estimated that it would only take $5 billion to end most of those 9 million deaths. Another 7 billion would be enough to educate all those children. That 70-80 billion a year would eradicate the worst of world poverty. I know — for those of you who will argue strategy — money is not all that’s needed to solve these problems. In fact sometimes just throwing money at the issue cause more problems. Though even good strategies require funds, my desire is that we would simply ponder what might happen if the church started a giver’s challenge.

On the average, at Calvary, we give 3-4% of our income to Calvary, we have a budget of over $1 million with $300,000 given to missions. If we all upped our giving to 10% our church alone would have another $3 million/year to help the under-resourced in our community and around the world.

Who wants to join the 10% Giving Club?

Imagine if every congregation in State College had one?