Last week we visited Lynn’s Grandmother (Mum Mum) for her 100th birthday party.  She is really quite amazing.  She is remarkably healthy, remarkably sharp. 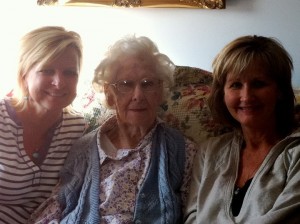 You don’t want to get into a discussion on politics with her because you will lose.  She has lived with Lynn’s aunt and uncle for as long as I’ve known her and up until a year ago, her apartment was on the third floor!  She was born in Norway and is Norwegian through and through.  In fact my one saving grace when I first started dating Lynn was that my grandfather was born in Norway.

While I was at her birthday party, I was trying to imagine all the changes that she has lived through.

She was born in 1912.  That year also saw the births of Ark Linkletter, Francis Schaeffer, Eva Braun, Lady Bird Johnson, Perry Como, and Wernher Von Braun, which gives some sense of the history through which she lived.

So many changes, sometimes it seems like the only thing that never changes is the fact that everything changes.  Which made me pause to ponder the things that do not change, that never will change, at least not on this side of death; for example, the love of God, the character of God, the value of prayer, the importance of relationships, the value of people, the joy that comes when we see God@work around us, the Kingdom, the Gospel.  Stuff like that.

Every time we talk to Mum Mum, a certain liturgy is followed.  We say, “How are you Mum Mum?”  She says, “Oh not so good.  I thought I would be dead by now. I’m not sure why God is waiting so long.”  Then we say, “I think it’s because He wants you to keep praying for your family.”  And I would guess that there are only a handful of people who have prayed for me more the last 30 years.

So where is your life truly invested?