Evangelism #3 — Blame It On Politics?

Last week, two different articles were forwarded to me regarding Millennials.  Both articles referred to a recent report form the Pew Center entitled “Religion Among the Millennials.” It’s part of Pew’s ongoing research of the generation of young adults between 18-29. 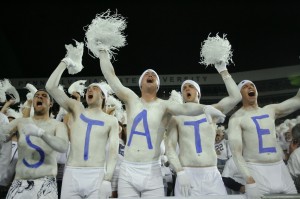 While the findings from this report are of great interest to me — 18-29 year olds make up half our community — I could have told you some of the results without the need for a survey.  Living in a university town, you pretty much know that millennials tend to tip to the left politically, are more tolerant of differences in people’s lifestyles, thoughts and beliefs, and they are fairly open to change.

Their lack of “belonging” when it comes to faith-organizations didn’t surprise me either.  We recently did a message series at Calvary entitled “UnChristian” and our eyes were opened to the reputation that the church has with millennials.  In fact millennials are more unconnected to church then any previous generation — at the same age.  At the same time the Pew research is finding that although millennials are extremely disconnected from church, their belief systems still closely resemble that of older people today.  One paragraph reads,

“Young adults’ beliefs about life after death and the existence of heaven, hell and miracles closely resemble the beliefs of older people today. Though young adults pray less often than their elders do today, the number of young adults who say they pray every day rivals the portion of young people who said the same in prior decades. And though belief in God is lower among young adults than among older adults, Millennials say they believe in God with absolute certainty at rates similar to those seen among Gen Xers a decade ago.”

In other words, it is less the case that this generation is losing faith and more the case that they are leaving church.  They are unplugging from religious organizations at an unprecedented rate.

The question is why are they dropping out?  The book UnChristian has several reasons.  Robert Putnam — author of the book Bowling Alone — focuses on one of those reasons.  Last year in a presentation that Putnam gave for the Pew Foundation.  He said this,

“Young Americans are dropping out of religion at an alarming rate of 5-6 times the historic rate (30-40 percent have no religion today versus 5-10 percent a generation ago).  ….youth’s religious disaffection is largely due to discomfort with religiosity having been tied to conservative politics.”

Last week I wrote two blog posts about evangelism.  The word literally means “tell good news.”  So I asked the question, “How did telling good news get such a bad rap?”  I think the reason might be that somewhere along the line we traded the good news of the (big K) — Kingdom of God for the okay news of a (little k) kingdom of politics.  If our politics is keeping us from reaching millennials — it might be time to let the donkey and the elephant retire to pasture.

If you would like to ponder the difference between Big K-good news and little-k good news, click