In the last post I shared part of an e-mail I received from Pastor/Businessman Ernso Jean-Louis.  His daughter Christina is a student at PSU and also comes to Calvary.  So when I wrote the post, I wanted to put in a picture.  I thought — who knows I’ll google Ernso.  Wasn’t really expecting to find anything — a picture on the internet of a pastor/businessman in Haiti?

But not only did I find a picture, but I found a bit of Ernso’s story — very cool story of vision, creativity, sacrifice and God.  I will be honest, when I first met 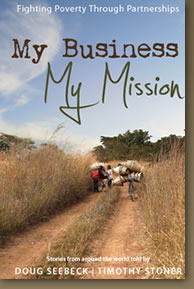 Ernso’s daughter and realized we had an opportunity to help this church and pastor in Haiti, I felt a bit of pride — big American church helping the poor Haitian church.  Then I heard that his church had 500+ people and the leader in me thought — hmmn this is good, big American church partnering with a pretty big Haitian church — we can make a bigger impact for God.  Then I read Ernso’s story.  I went from a bit of pride to an excitement for partnership to a posture of humility.  I just want to serve them and learn from them.

Good stuff — if  you have the time, read a bit of the story here:  Bearing Much Fruit.  It’s actual a chapter from this book.