I remember going on the Jungle Cruise at Disney World for the first time with my daughters — Katy was about 4 years old. 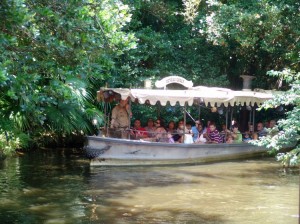 If you have never been on the Jungle Cruise, you sit in boats and float down a man-made river, filled through a man-made jungle filled with fake dangers and thrills. We were sitting in our boat and guide is talking about the wild animals and the restless warrior natives, he’s cautioning us to be careful and follow his directions. He’s holding his pistol and promising to guard us with his life. We round a curve in the river, the guide fires his pistol and yells, “Hit the floor, it’s an attack.” I look over at Katy and I can’t keep the laughter in my mouth as I watch her throw her four year old body, face first to the floor…arms covering her head. A perfectly normal response to the thrill of the danger.

But then you get older and you’ve been on the Jungle Cruise four or five times, and it loses it’s thrill…I know where the fake crocodile hides and when the hungry hippo roars…I know the words of our fearless guide by heart, especially the jokes. It’s easy to doze off. The only way to get a thrill is to live vicariously through the thrills of those to young to know any better.

For some of us…maybe especially those of us who have — or at least think we have — followed Jesus for a long time, our faith has become like a Disney ride. If you think that being a Christian is all about coming to church on Sunday morning, singing a few songs and listening to someone speak…your faith is nothing more than a Disney ride and I’m telling you sooner or later it will lose it’s thrill. You know the stories, you’ve exchanged the adventure for a man-made momentary thrill.

What if it’s nothing like a Disney ride? Wouldn’t that be cool?