Christmas Blog Series: Any Rudolphs in Your Life?

In 1949 it was the Christmas song of the year over 2 million records were sold.  Today it is still one of the the highest selling Christmas carols at ~25 million sold.  It started as an Montgomery Wards marketing gimmick.  In 1939 advertising executive Robert May was asked to write a poem that could be given away to children who came to the store to visit Santa. 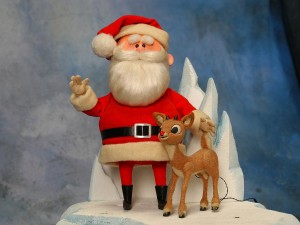 “Rudolph the Red-Nosed Reindeer” came from his pen, was put in booklet form, and more than 2.5 million copies were handed out by department store Santa’s.  By 1946 the number had grown to 6 million copies given away.  In 1949, May’s brother-in-law Johnny Marks, wrote music to go with the words and it was recorded by the singing cowboy, Gene Autry (after it was turned down by Bing Crosby and Dinah Shore). And since that time, Rudolph has “gone down in history” (forgive me) as one of the most popular of Christmas songs.

So here is my question, “What is it about this simple song that has made it so popular?  Is it the catchy tune? Probably not, May and Marks were not exactly Rogers and Hammerstein! Perhaps it’s the innocence and courage of Rudolph, the anti-hero of the story.  Could be, but I think what really grabs us at Christmas is the offer of grace that leads to someone making a difference in the world.  Making a difference in the world is part of the heart of Christmas.

The real beauty of the story is the grace offered by Santa which leads to Rudolph’s opportunity to matter for others. By grace, Santa chooses Rudolph despite the fact that he’s a clear outsider, a reject with a defect, that disqualified him from the companionship found in playing reindeer games. But whom did Santa choose when when the fog rolled in? That’s right, the little reindeer with the shiny red nose. His defect became an avenue through which others were helped and Santa’s mission was accomplished.

So here is my challenge, look around you, who are the Rudolph’s in your life?  What would it look like for you to show them the gift of grace?  Join the One who gives grace and you will make a difference in the world.
Logging In...