Can God Interrupt You?

Are you interruptible? Last week, that was the application point that I left with us. (If you weren’t here, click

1. The Ripple Effect
to listen.)  That’s the question that continues to hang with me this week. On Monday, I prayed, “Lord please interrupt me today.” 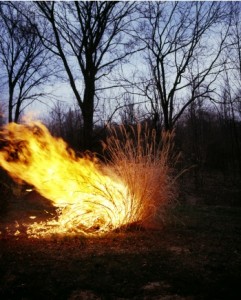 As I think about interruptions, God keeps drawing my attention to a burning bush.  Moses was this humble, courageous leader who struggled with doubt; this imperfect man of God who was so passionate for the presence of God. Participant in miraculous moments and moments of failure. But one thing that is so compelling about Moses is that it says…in Ex 33:11 “The Lord spoke with Moses face to face, as a man speaks to a friend.”   But do you know where it all started?  A burning bush.

One day, Moses was out taking care of the sheep and goats. They weren’t even his. He wasn’t a rich man or a successful man…he was a goat-herder. It just so happened that Moses was leading his goats to Mt. Sinai, the holy mountain. God appeared in a bush that was on fire but not burning up. This is strange!” Moses said to himself. ” I will turn aside and see why the bush isn’t burning up.” When Moses turned aside, God called him by name, and Moses answered, ” Here I am.”

That’s where it started. Moses turned aside.  He allowed his day to be interrupted by God.  It was just a bush. Bush’s like this all over the place, passed by thousands of-em following these stupid sheep. Just a bush… Everybody in his neighborhood had a bush, some people had three or four. But this time the bush was on fire with the presence of God. And Moses said, I must turn aside and look at this great sight…so he turned aside and… he heard the voice of God.

Do you see how everything hinged upon his willingness to turn aside? Everything hinged upon his willingness to be interrupted by God. You’re thinking…I would’ve done that. Who wouldn’t turn aside to be with God? Hear his voice, experience his presence, feel the fire. The reality is that we live in a culture of preoccupied noise. I have a suspicion that’s turning into a conviction… I think we run past burning bushes every day without turning aside long enough to discover holy ground…with God.

It reminds me of Mary. Mary allowed God to interrupt her plans. She took on a nine month interruption that led to the interruption of her life. What does turn aside look like for you this week? Will you let God interrupt you?