A Heart for Sacred Spaces

It’s one of my favorite stories because it grabs my heart no matter how many times I hear it or tell it.  Picture a South African woman standing in an emotionally charged courtroom. 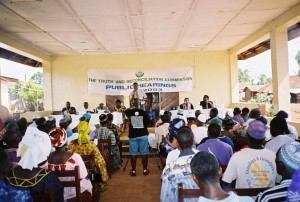 She is listening to white police officers acknowledge the atrocities they had perpetrated in the name of apartheid.  Listen in as Officer Van deBroek acknowledges his  his responsibilty in the death of her son.  He shot her 18-yr-old son at point-blank range.  Your stomach turns as you listen to him tell how he and others partied while they burned his body, turning it over the fire until it was reduced to ashes.

The tears start stream down your face as you learn that eight years later Van deBroek and others arrived to seize her husband.  A few [hours] later, shortly after midnight, Van deBroek came to fetch the woman. He took her to a woodpile where her husband lay bound.  She was forced to watch as they poured gasoline over his body and ignited the flames that consumed his life.

Your tears are turning to anger.  You simply cannot understand how somebody could do something like that to a person.  Then you hear this small woman relate that the last words she heard her husband say were the words, “Forgive them.”

Now, van deBroek stands before her awaiting judgment. South Africa’s Truth and Reconciliation Commission asks her what she wants to happen.  “I want three things,” she says calmly.   You are waiting for her to exact retribution.  “I want Mr. van de Broek to take me to the place where they burned my husband’s body. I would like to gather up the dust and give him a decent burial.”  You are still waiting for justice.  She goes on, “Secondly, Mr. van deBroek took all my family away from me,” — you are eager to hear her bitter judgement — “and I still have a lot of love to give. Twice a month, I would like for
him to come to the ghetto and spend a day with me so I can be a mother to him.”

Your mouth drops open and almost as quickly your eyes start to leak.  “Third, I’d like Mr. van de Broek to know that he is forgiven by God and me. I would like someone to lead me to..(him), so I can embrace him and he can know my forgiveness is real.”

As the elderly woman was led across the courtroom, Mr. Van deBroek fainted. Someone began singing
“Amazing Grace.”  Gradually everyone joined in, as a good heart transformed a courtroom into sacred space.