So as I said in an earlier post, one of the great privileges of my Lilly sabbatical is taking each of my kids on a trip of their choosing. Josh chose Six Flags and a lifetime’s worth of rollercoasters. Jake chose the Black Hills. He wanted something outdoors…we thought about rafting on the New River in Virginia…we thought about doing something in Colorado…finally chose the Black Hills.

If you’ve never been to the Black Hills of South Dakota, you should go sometime, lots to do and see. 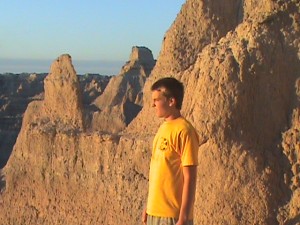 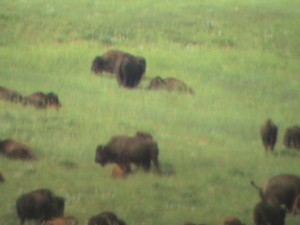 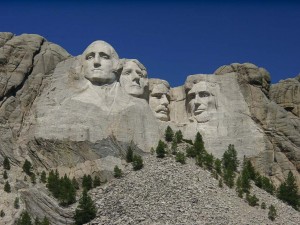 A couple of the largest caves in the world. The badlands. The buffalo and antelope in Custer State Park. Spearfish Canyon. I could go on and on. Growing up in South Dakota, I’ve been to the Black Hills a number of times, but one thing I’ve never done in the hills — rock climbing! So that’s what we did.

We took a full day…went out with a guide from Sylvan Rocks. He spent the first two hours with us doing some teaching and some practice climbs — forty to sixty foot practice climbs! We were with a group that included two girls younger than Jake and an assortment of girls and boys even younger. In other words I was the oldest.

Now I’ve been working out for about a year now…aerobic stuff, even weights. I’m thinking I can handle this. I can do at least as good as these two girls — maybe even better than Jake. :) So I made it up the first practice climb…but I couldn’t believe how much it took out of me, especially my legs. Before I hit 40 feet, my right log was shaking, like it was going to give out on me. Made the second practice climb, but only 1/3 of the way up the third practice climb. Practice was over.

We headed out, just Jake, I and our guide. He was going to take us on four climbs. Two 60 foot climbs. 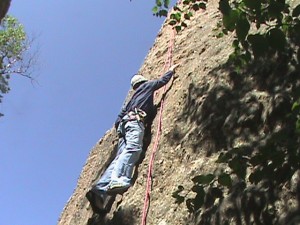 One 80 foot climb. One 120 foot climb. I made the first two 60 foot climbs, and in spite of being drenched in sweat, having a leg that kept giving out, and feeling more tired than I could imagine, I felt kinda good about life. So it wasn’t easy — my pride took a big hit — to tell Jake and my guide that I wasn’t even going to attempt the 80 foot climb. (I wanted to save myself for the 120.) But I have to tell you, while it bit at my pride…it did my father-heart good to watch my son Jake exceed me and make it all the way to the top of the 80 foot climb — which our guide said was the most difficult climb we would make that day.

So then we headed to the final climb of the day…120 feet. Standing at the bottom, the only way that I could tell it wasn’t a straight vertical climb is that I couldn’t see the guide who was already at the top. Then I watched Jake start up…his long arms finding holds I would never be able to reach! Then I started. I 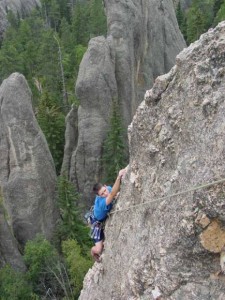 wish I could adequately describe the whole climb…the crevice that I didn’t think I could pass…the ledge that you had to swing your body around while hanging on to a small piece of granite…the small portion that had an overhang. Instead all I’ll tell you is that 3/4’s of the way up, I was ready to quit. (The picture you see is the route we took, about 3/4’s up, but that’s not me.) The only thing that kept me going was that my son was waiting for me on top of the mountain. So with a series of loud grunts and yells…I forced my body onward.

And at the top…what a beautiful sight! An incredible view of the Black Hills. The heart-filling satisfaction of just having made it to the top. Sitting there with my son at the top of the mountain. Very cool. There was a notebook in a water bottle, attached to the top. We joined the dozens of people who signed their names at the top of the mountain. I signed my name and wrote a word or two about God’s amazing creation and then paged to the front. Wish I hadn’t done that! Found out that the name of our mountain was Old People’s Dome! And the route we had taken was called Senility’s Pass! What I had thought was a mountain top journey — for some people — was just a day in the retirement home! But still for Jake and I, a great day, a great accomplishment.

So what did I learn? Mountain-top experiences require a lot of hard work. The higher the mountain the greater the price you must pay to get there. Your mountain might be someone else’s molehill — or it might be someone else’s Everest. Don’t worry about comparing, just enjoy your mountain. A mountain top experience is better when shared. It’s good to have a guide up the mountain. And finally, it doesn’t make the mountain top experience any less thrilling when you were tied to a rope on the way up, it just makes the fall a little less killing! So get connected and belay with God!

(Here is Jake on the mountain I didn’t climb!)