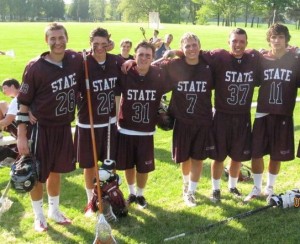 They played Sewickley Academy — which happens to be where my daughter Sarah currently lives — and the Academy prevailed. In fact it was 8-0 at the end of the first half.

Having been on the downside of some athletic conquests in my day, I could relate. But to be honest it’s often on the downside of life’s events that we find some of our greatest moments. I don’t know that Jake would say that last night was one of his greatest moments, but I was proud of him. Why? Because he finished well.  He didn’t quit.  He played hard till the end and he led well to the end.

Good starts are great. We value good starts, first impressions, first kiss, first day on the job…it’s all about getting a good start. And the reality is that often a good start leads to a good finish, but one of the most important life-truths we can learn is…

In the race of life God is far more interested in how you finish than how you begin.

We’ve seen what happens when great starts lead to poor finishes.  In every generation greatness is more often determined by the ability to persevere and overcome obstacles, than it is by the blazing start.  The initial scoop on Vince Lombardi was that he had minimal football knowledge.  Walt Disney was once fired by a newspaper for a lack of ideas.  Thomas Edison’s teachers gave up on him. Their evaluation read, “He is too stupid to accomplish anything.”  Beethoven handled the violin awkwardly and his teacher called him hopeless as a composer.

In the race of life, God is far more interested in how we finish than how we begin. I don’t agree with many things that Frederick Neitsche wrote, but I do agree with one quote.  He wrote, The essential thing in heaven and earth is that there is a long obedience in the same direction.

Yesterday was Jake’s last lacrosse game.  Today is Jake’s last day of high school.  In many ways the summer will be full of last-things.  But it’s not just last things — it’s commencing.  I love that graduation is also called commencement.  Commencing is all about beginning…and it’s so often the case that finishing well leads to a new beginning.  I know I’m his dad — so I’ a bit biased — but I would say that if last night’s game is any indication, he is going to commence well.