You are the light of the world. A city on a hill cannot be hidden. Neither do people light a lamp and put it under a bowl. Instead they put it on its stand, and it gives light to everyone in the house. In the same way, let your light shine before men, that they may see your good deeds and praise your Father in heaven.” Jesus (Matthew 5:14-16)

In 1987 Mike Hayes of Rochelle, Illinois was a freshman at the University of Illinois.  He was trying to figure out how to pay for school.  He came up with an innovative solution.  He wrote to Chicago Tribune columnist Bob Greene, asking each of Greene’s readers to send Hayes a penny.  Greene liked the idea and asked each of his several million readers to send Hayes a penny.  In less than a month, the Pennies for Mike fund contained 2.3 million pennies.  In the end Mike raised $28,000 for four years tuition.  Mike asked for a little bit from a lot of people — and the pennies accumulated.

Sometimes we think that the only way we can make a difference is through a significant, solitary sacrifice, and I believe that God loves sacrifice.  But I also believe that He loves teamwork.  If you grew up in the church you might be familiar with the concept of a tithe.  To tithe is to give God the first 10% of what we own.  For many today the tithe seems like a significant, solitary sacrifice, but I think it was really more about teamwork than it was about sacrifice.

My 10% plus your 10% plus his 10% plus her 10%…  Did you know that if Americans who identify with the historically Christian church increased their giving to an average of 10% of income, there could be an additional $170 billion given to the church — annually.  About 5 billion dollars a year would prevent the majority of the poverty related deaths of children under the age of 5. 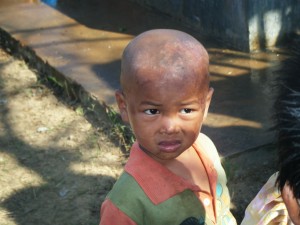 One person can’t give solve global poverty, but what if millions of us gave $10? $10 supports one Burmese orphan for two weeks.  It may not seem like much to us, but I guarantee you it seems like much to Abraham in Myanmar.

The challenge is to get many people involved in daily donations to our cause.  The challenge ends on November 6th with the top seven causes receiving between $10,000 – $50,000. In addition there is a daily challenge, the top daily cause receives a $1000.

This last week about 50 people gave about $1000 and because of that 4 children will have food, clothing, education and medical help for about a year!  Pretty cool teamwork.  If you would like to join the team…

Or give without joining by clicking Hope for Myanmar

Jesus says you are the light of the world.  You are not the sun.  Maybe not even a flashlight with ever-ready batteries.  Maybe you’re just a candle — a little birthday candle, but imagine if everyone lit their candle and let it shine.